Where Are the Oldest Companies in Existence? 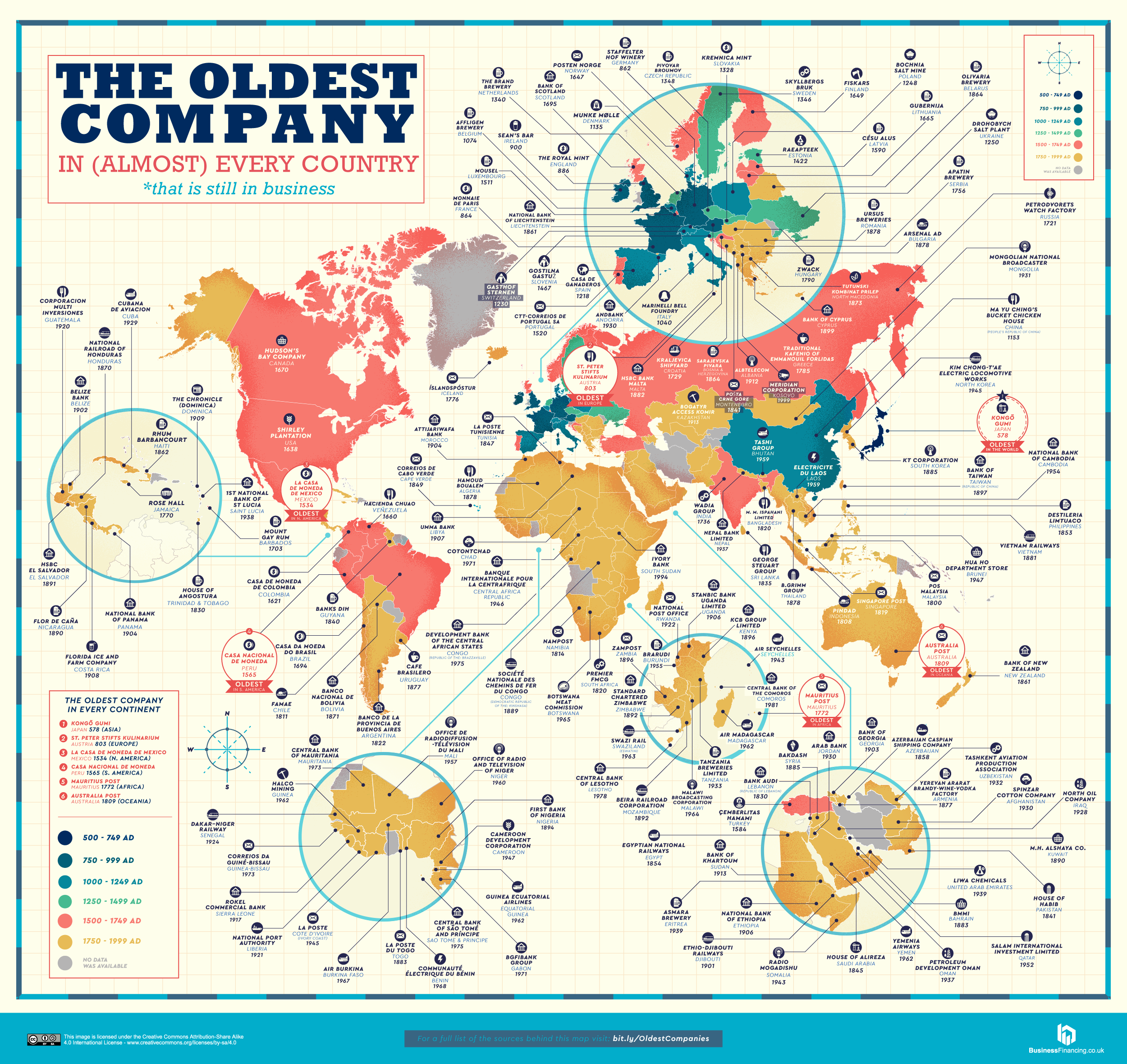 In just a few decades, it’s possible that some of today’s most recognized companies may no longer be household names.

Corporate longevity, or the average lifespan of a company, has been shrinking dramatically.

In the 1960s, a typical S&P 500 company was projected to last for more than 60 years. However, with the rapidly transforming business landscape today, it’s down to just 18 years.

The Companies With the Strongest Staying Power

Even with companies skewing younger, there are always exceptions to the rule.

Luckily, many companies around the world have stood the test of time, and today’s detailed map from Business Financing highlights the oldest company in existence in each country.

For centuries, here are the world’s oldest corporations which have made their mark:

Whether they were born out of necessity to support a rapidly growing population—requiring new infrastructure and more money circulation—or simply to satisfy peoples’ thirst for alcohol or hunger for fried chicken, these companies continue to play a lasting role.

The Oldest Company in Every Country, by Region

Let’s dive into the regional maps, which paint a different picture for each continent.

In the following maps, countries are color-coded based on the major industry that the oldest company falls under:

This research considers both state-run and independent businesses in their definitions. For countries where data was hard to pin down, they have been grayed out.

As well, since many countries have a relatively new inception, present-day names and borders have been used. The map does not factor in older companies that are no longer in operation, or if it was unclear whether they were still open. 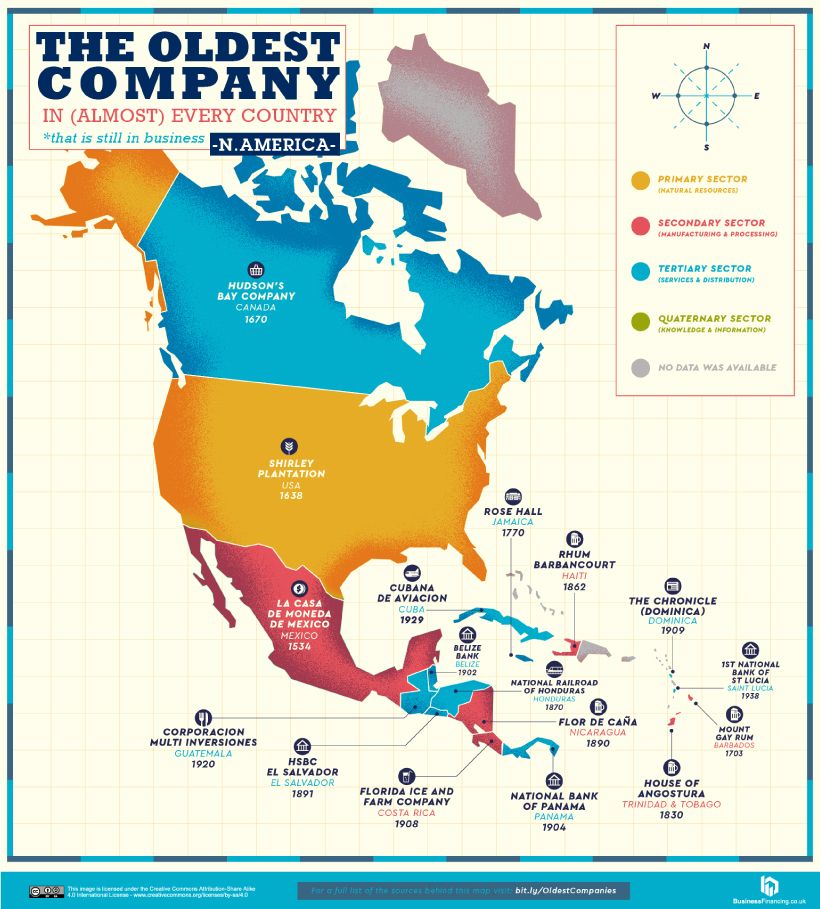 Mexico’s La Casa de Moneda de México (founded 1534) is the oldest company across North America, and the first mint of America. Owned by the Spanish conquistador Hernán Cortés, it was where the famous ‘pieces of eight’, or Spanish dollars were created. In the U.S., the Shirley Plantation in Virginia is an ongoing reminder of the history of slavery. First founded in 1613, business actually began in 1638—and as many as 90 slaves were under indentured labor on the estate growing tobacco. Further north, Canada’s Hudson’s Bay (founded 1670) was at the helm of the fur trade between European settlers and First Nations tribes—the two parties agreed on beaver pelts as a common, valuable trade standard. 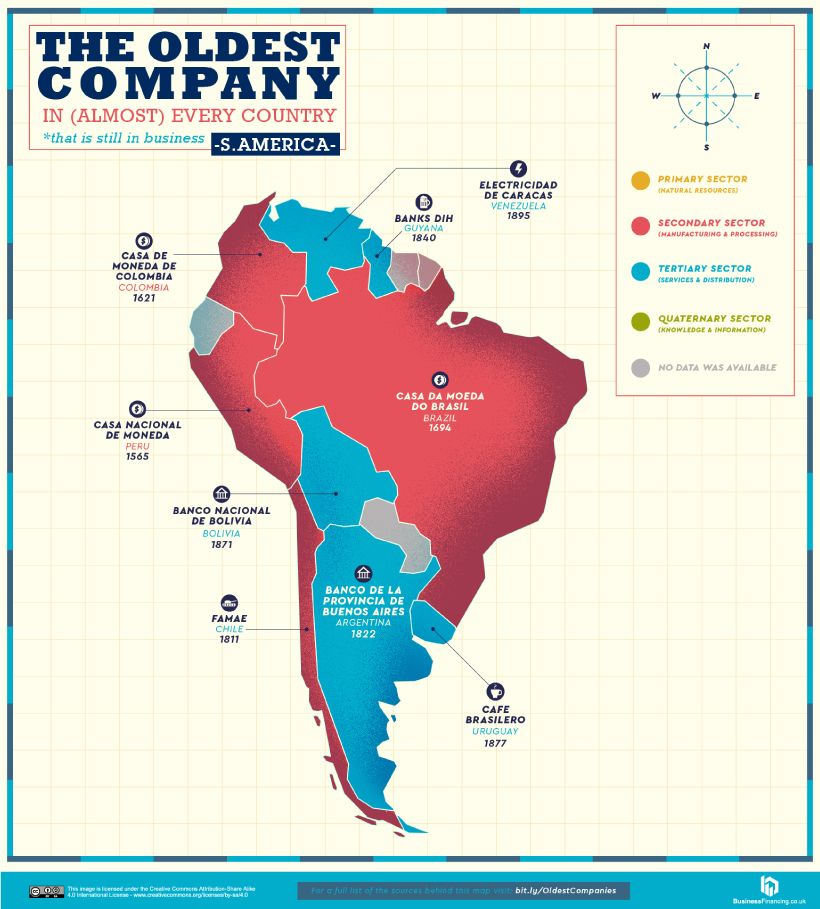 Three of the five oldest companies in South America are mints—specifically in Brazil, Colombia, and Peru. The oldest of these mints, Casa Nacional de Moneda in Peru, was built on order from Spain and established in 1565. After the great influx of newly-mined silver from America to Europe, the Spanish crown outlined to King Felipe II that building a mint would give the colony economic benefits and more control. 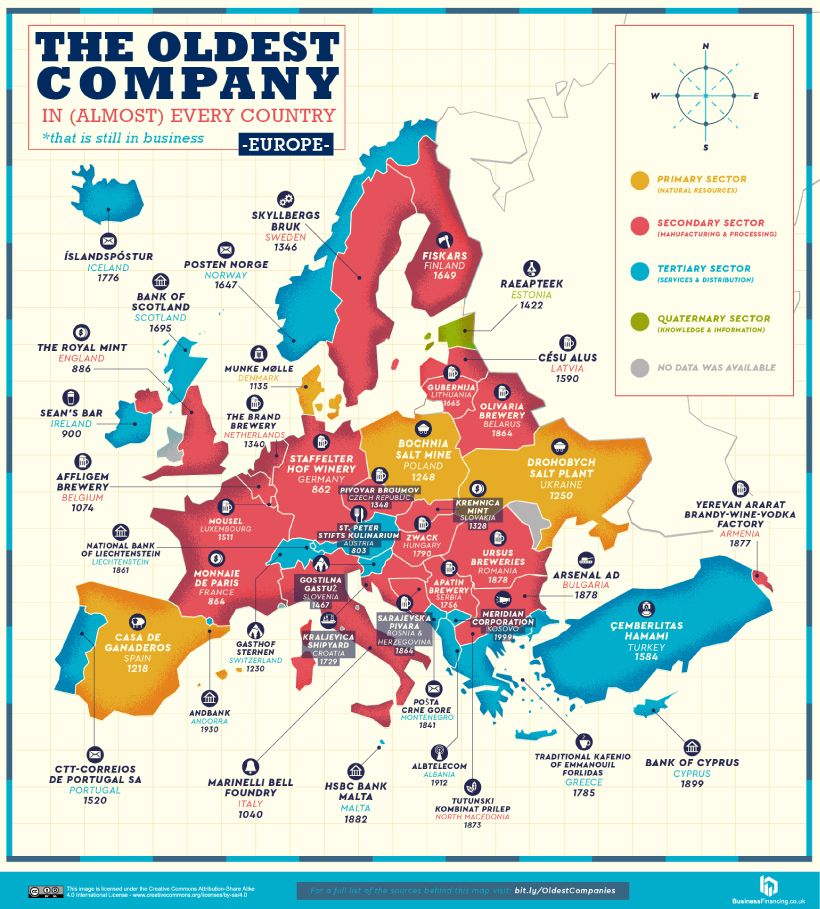 In total, 15 of Europe’s oldest companies are related to the food and beverage industries, from distilleries, vintners (winemaking), and breweries alongside restaurants and pubs. Austria’s St. Peter Stifts Kulinarium (founded in 803) is Europe’s oldest restaurant, located inside the St. Peter’s Abbey monastery. Although Germany is famously known for its beer culture, its oldest company is in fact the Staffelter Hof Winery (founded in 862). Today, Germany is still a top wine country, with the industry generating up to $17 billion in revenue per year. 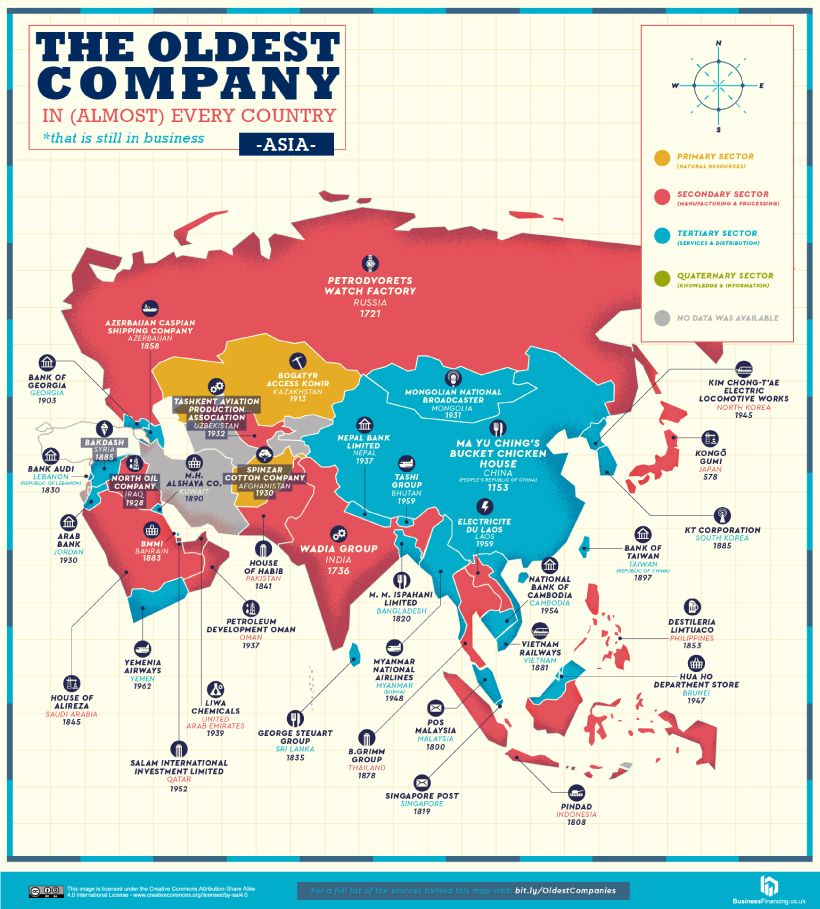 Asia has six oldest companies in the banking and finance category, as well as another six in the aviation and transport sector. The continent is also home to two of the world’s oldest companies, located in Japan and China. The Japanese temple and shrine construction company, Kongō Gumi Co., Ltd. (founded in 578) has weathered a few storms over the millennia, from nuclear bombs to financial crises. In 2006, it was bought by the construction conglomerate, Takamatsu Construction Group Co., and continues to operate today. In neighboring China, Ma Yu Ching’s Bucket Chicken House has endured dynasties of change as well. The company’s simple premise has come a long way, and it was named a cultural heritage in the country’s Henan Province. 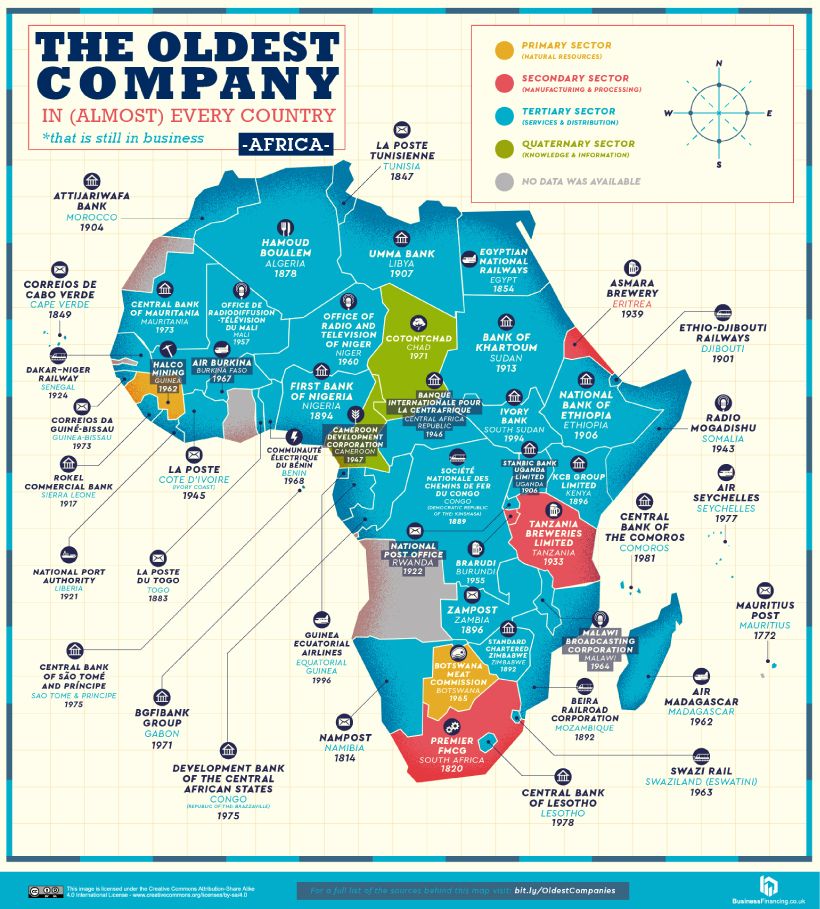 Africa’s oldest companies are another vestige of the colonial legacy, with 11 transport companies—airlines, ports and shipping, and railways—and 9 postal services. In fact, Cape Verde’s Correios de Cabo Verde (postal service, founded in 1849) and the DRC’s Société nationale des Chemins de fer du Congo (national railway company, founded in 1889) still go by their Portuguese and French names respectively. Banking is another one of the oldest industries, with 17 companies across Africa. Zimbabwe’s Standard Chartered branch has been around since 1892, a subsidiary of its London-based parent company. 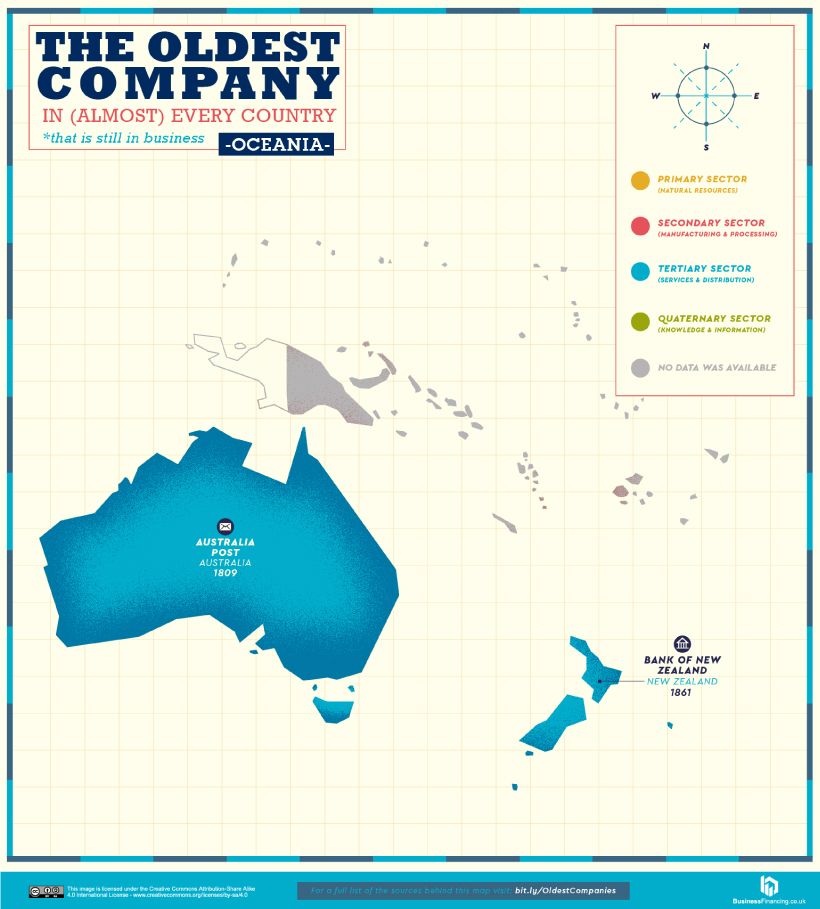 Australia officially became a country on January 1st, 1901—but its oldest company, the Australia Post (founded in 1809) precedes this by almost a century. Interestingly, just one more old company could be located for this region, which is the Bank of New Zealand—one of the country’s Big Four banks. All in all, these oldest companies paint a historical picture of the major industries which have shaped entire regions.